Originally from Uzbekistan, Cellist Dilshod Narzillaev came to Park University to study with cello professor Daniel Veis in 2015. In 2020, Dilshod won Fourth Prize at the famed Antonio Janigro International Cello Competition in Zagreb, Croatia. Beginning in 2020, he will be studying under full scholarship with Laurence Lesser at The New England Conservatory of Music. But as Dilshod says himself, he will always be returning to Kansas City and Park University as it is his “second home.” 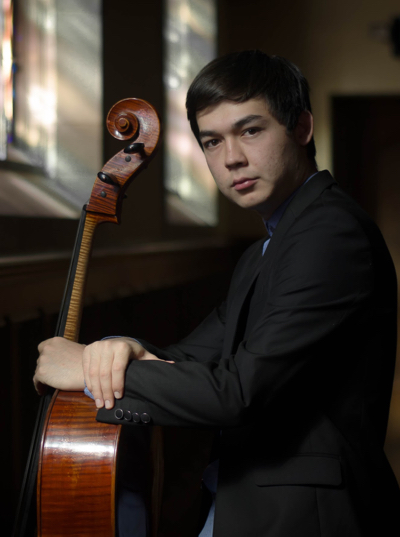 Cellist Dilshod Narzillaev was born in 1997 in Navoi, Uzbekistan. In 2007 he began studying cello under the tutelage of Professor Djakhongir Ibragimov in the R.M. Glier specialized lyceum in music, Tashkent, Uzbekistan.

Narzillaev has performed concertos of Saint-Saens, Dvorak, Haydn with Uzbek National Symphony. He made his debut with Shostakovich’s first concerto with the Croatia Radio Television Symphony Orchestra. He has also frequently performed on the Uzbekistan National Symphony Orchestra and made his debut with Kansas City Chamber orchestra in Kauffman Center for the Performing Arts in 2016. He has in master classes for cellists such as Philippe Muller, Gary Hoffmann, Ophelia, Gaillard, Antonio Lysy, David Hardy, Steven Doane, Yeesun Kim, Frans Helmerson, Rosemary Elliott, David Geber, Eugene Drucker, Colin Carr, Amit Peled.

Since 2015, he has been studying at the ICM bachelor degree under the tutelage of Daniel Veis.