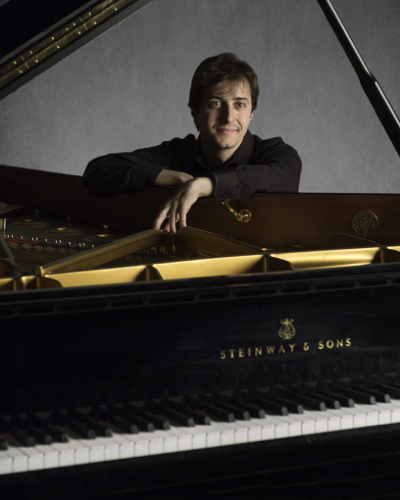 KANSAS CITY, MO (May 21, 2019) — Stanislav Ioudenitch, Director of Piano at the Park International Center for Music, confirmed today that Kenny Broberg, Van Cliburn Silver Medalist and Park ICM piano master’s candidate, was among the 24 piano competitors announced recently by the jurors of The International Tchaikovsky Competition. The 51-year-old competition is held every four years in Moscow and St. Petersburg and begins June 17, 2019. “Kenny’s invitation to participate in The Tchaikovsky Competition is a testament to his remarkable talent, work ethic and astonishing dedication to his art,” said Ioudenitch. “Kenny is one of only two competitors from the United States. Thus we are extremely thrilled that the International Center for Music at Park University has a student representing both the University and Kansas City in the most esteemed piano competition in the world.”

Considered one of the major events in the international music community, the inaugural International Tchaikovsky Competition took place in 1958 with only two disciplines, piano and violin. The first cello competition took place in 1962. Singing was added in 1966. The XVI Competition will introduce a new specialty, woodwind instruments. The main purpose of the musical competition is revealing new talent. Past competitions have spawned such renowned musicians as Van Cliburn (piano), Vladimir Ashkenazy (piano), Gidon Kremer (violin), Grigory Sikolov (piano), Natalia Shakhovskaya (cello), Elena Obraztsova (mezzo soprano), and Daniel Veis, cellist, who is head of Park ICM’s cello department. But this year’s competition is purported to be “biggest-ever!” The Russian Federation and the Ministry of Culture are putting on a big show with the 16th competition. It will be attended by Vladimir Putin, among other high level officials like Valery Gergiev, Artistic and General Director of the Mariinsky Theatre, Co-Chairman of the Organizing Committee of the XVI International Tchaikovsky Competition.

Each competitor is invited to submit a video audition. From a total of 954 applications representing 58 different countries, the jurors whittled the selection to 24 pianists, 24 violinists, 24 cellists, 60 vocalists and 96 wind instruments. The grand prize of $100,000 is decided in three rounds, culminating in a final awards ceremony that will take place on June 28th in Moscow with the gala concert taking place the following evening in St. Petersburg. An additional $30,000 prize is awarded to each category.

Since winning the silver medal, Kenny has literally performed all over the world with world-renowned conductors in world-class performing venues. Kenny’s story began in the Tangletown neighborhood of Minneapolis, Minnesota. He was fascinated by his mother’s upright piano, a wedding gift from his mother’s parents, and then started piano lessons in earnest at age 6. He studied for nine years with Dr. Joseph Zins before entering the University of Houston’s Moore School of Music, where he studied with Nancy Weems and earned a Bachelor of Music degree in 2016. He currently is pursuing a master’s degree in piano performance with Stanislav Ioudenitch at the Park International Center for Music.

ABOUT PARK INTERNATIONAL CENTER FOR MUSIC – Park ICM was established (www.park.edu) at Park University in 2003. This All-Steinway School trains and educates the next generation of accomplished musicians in a focused and creative atmosphere with an international faculty of renowned excellence. Park ICM offers degree, certificate and diploma programs at the graduate and undergraduate levels. Our courses of study are focused in the areas of performance in violin, viola, cello and piano. At the core of all ICM programs is one-on-one studio instruction providing vital interactions between the student and master faculty, having just completed its 15th season. This extremely exclusive music academy selects just 30 students each year to study in the historic European apprenticeship tradition. Park’s amazing campus provides focused and uninterrupted practice time 24-hours daily in a serene and extremely supportive environment. The master faculty also coaches musicianship and career development so that the students will become award-winning musicians, traveling the world and entertaining the most discerning music lovers across all continents.

Visit icm.Park.edu for more information about Park ICM’s students, faculty and performance season. High-resolution photos can be obtained by contacting Ellen McDonald, Publicist, at 816-213-4355 or ellen@mershonandmcdonald.com.