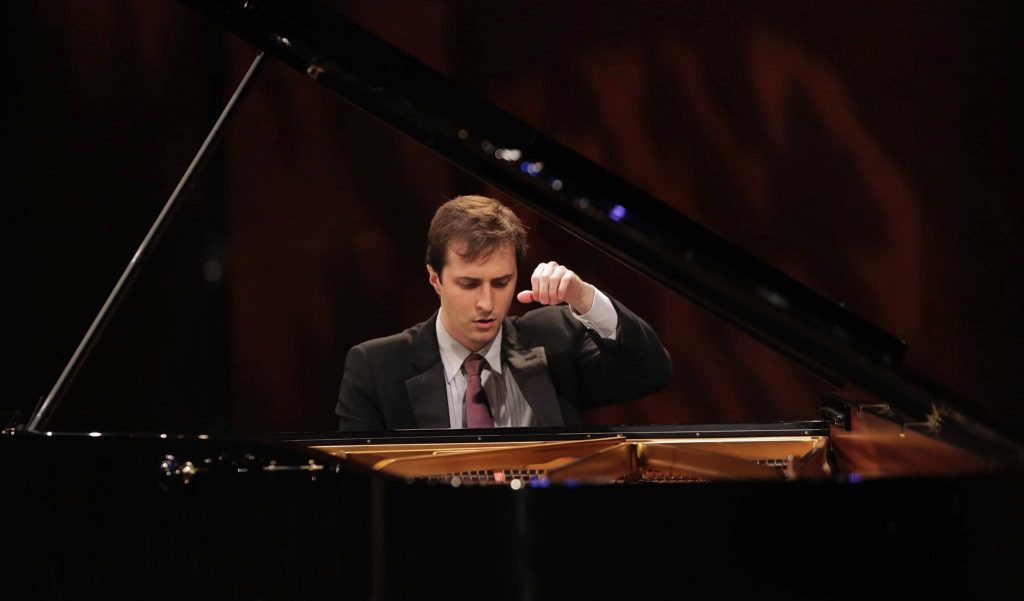 INDIANAPOLIS, IN [Wednesday, March 11, 2020] – The American Pianists Association’s President/CEO and Artistic Director, Joel Harrison, announces the five pianists who will be finalists for the 2021 American Pianists Awards. Dominic Cheli, Kenny Broberg, Mackenzie Melemed, Michael Davidman and Sahun Sam Hong will participate in the organization’s unique 13-month long competition for the coveted award, given every four years to a classical pianist. Every two years the American Pianists Awards alternates between classical and jazz.

Valued at more than $100,000, the American Pianists Awards winner receives the Christel DeHaan Classical Fellowship, which includes a $50,000 cash award and career assistance for two years, including publicity, performance engagements, an Artist-in-Residence post at the University of Indianapolis, and a recording contract with Steinway & Sons record label.

2021 participants were selected via blind audition from over 40 nominations during the preliminary round, which was held from March 6 through March 8, 2020. American pianists ages 18-30 are eligible to participate. The Premiere Series takes place from October 2020 through February 2021, and provides the first live juried performances for the five finalists. Over the course of those five months, each finalist makes an initial appearance on stage in Indianapolis for solo and concerto performance with the Indianapolis Chamber Orchestra, conducted by Matthew Kraemer, as well as a three-day residency in one of five Indianapolis-area high schools. Each residency culminates in a public performance of a concerto with the school orchestra.

Discovery Week, the pinnacle of the American Pianists Awards, takes place from April 12 through April 17, 2021, bringing all five finalists together for adjudicated performances including a concert with the Dover String Quartet, a solo recital featuring the world premiere of a commissioned work by composer Laura Kaminsky, a song recital with soprano Christine Brewer and baritone Andrew Garland, and the concerto finals with Indianapolis Symphony Orchestra conducted by Gerard Schwarz.

Each finalist performs a piano quintet with the Dover Quartet and additional solo repertoire at Christ Church Cathedral. These recitals are free to the public and broadcast on the Indianapolis NPR affiliate, WFYI.

All five finalists perform Kaminsky’s work and other American works at University of Indianapolis.

At the conclusion of these and other activities, a panel of international judges will award the Christel DeHaan Classical Fellowship to the winner of the competition.

Dominic Cheli (26) won first prize at the Concert Artists Guild Competition and was named winner at Music Academy of the West Concerto Competition in 2017. Dominic has performed with symphonies including San Diego, Columbus, Princeton, and Virginia as well as Nordwestdeutsche Philharmonie. Most recently, Dominic had his Carnegie Hall recital debut, and Naxos released his second album featuring the music of Liszt and Schubert. He debuted at several festivals including the Aspen Music Festival, Mostly Mozart Festival, and the Virginia Arts Festival. Dominic has performed as an artist for Project: Music Heals Us, a non-profit organization that presents interactive classical music performances to diverse audiences in order to provide encouragement, education, and healing with a focus on elderly, disabled, rehabilitating, incarcerated, and homeless populations. He holds a Bachelor of Music degree from the Manhattan School of Music, a Master of Music degree from Yale University and an Artist Diploma from Colburn School. His past teachers include Zena Ilyashov, Peter Frankl, André-Michel Schub, Sylvia Rosenberg and Fabio Bidini.

Kenny Broberg (26) is a Minneapolis native who won the silver medal at the 2017 Van Cliburn International Piano Competition and the 2019 bronze medal winner at the International Tchaikovsky Competition, as well as winning prizes at the Hastings, Sydney, Seattle, and New Orleans International Piano Competitions. Kenny has appeared with the Royal Philharmonic, Seattle Symphony, and the Louisiana Philharmonic Orchestras, among others. Recent and upcoming highlights include his debut with the Kansas City Symphony Orchestra, residencies at the Montreal Symphony’s Festival Virée Classique, Rye Arts, Methow Chamber, Strings, and Sunriver Music Festivals, recitals in Houston, Denver, Pittsburgh, Los Angeles, and Minneapolis, and in tours of Japan, Australia and Italy. He has been featured on NPR, WQXR, APM’s Performance Today, MPR and ABC (Australia) radio. His solo debut album was released in August 2017 on the Decca Gold label. Kenny studied for nine years with Dr. Joseph Zins before entering the University of Houston’s Moores School of Music, where he earned a Bachelor of Music degree with Nancy Weems in 2016. He currently resides in Parkville, Missouri, where he studies with Stanislav Loudenitch at Park University

Mackenzie Melemed’s (25) international career continues to flourish on the heels of winning the Juilliard School’s 2019 Leo B. Ruiz Carnegie Hall Recital Prize, the 2018 Arthur Rubinstein Piano Prize, the 2018 Paris Recital Prize from Poland’s Prix de Tarnów Competition, and Third Prize in the first China International Music Competition. Mackenzie has performed throughout the U.S., Asia and Europe. He recently joined the roster of Young Artists at the Centre for Musical Excellence. Mackenzie’s highlights include his debut at Carnegie Hall’s Weill Recital Hall as winner of the Ruiz Memorial Prize, solo recitals at Paris’ Salle Cortôt, Finland’s Arctic PianoFest, and Tuckerman Hall in Worcester, MA. In October 2019, Warner Classics released “Möbius,” featuring his performance of Jeajoon Ryu’s Piano Concerto with conductor Ralf Gothóni and Sinfonia Varsovia. In 2018, Mackenzie’s recording of Avner Dorman’s Three Etudes was released on the Steinway and Sons label. Mackenzie holds Bachelor’s and Master’s degrees from The Juilliard School and is currently in the school’s Artist Diploma program with Robert McDonald and Emanuel Ax. He is fluent in French and Finnish.

Michael Davidman (22) placed first in the Pre-College Concerto Competition in all three age categories (10, 12 and 16) as a pre-college studio at Manhattan School of Music. At 13, he was chosen by Lang Lang’s management to perform in the 2010 Lang Lang masterclass at Manhattan School of Music. In 2018, Michael won first prize at the New York International Piano Competition (chamber ensemble). As soloist, he has performed with the Philadelphia Orchestra, Monterey Symphony, Manhattan School of Music Philharmonic Orchestra, New York Concerti Sinfonietta, the NY Chamber Orchestra and more. He has given recitals at the Burgos International Music Festival, Teatro Alfieri, and in St. Petersburg, Russia with the International Academy of Music, among others. Michael has also performed on WHYY “Curtis On Stage”, WQXR McGraw Hill Young Artist Showcase, WSKG-FM Expressions Series, and NPR’s “From the Top.” Michael studied piano with Efrem Briskin at the Manhattan School of Music and completed his Bachelor of Music degree under the guidance of Robert McDonald at the Curtis Institute of Music. He is currently pursuing his Master of Music degree at The Juilliard School with Jerome Lowenthal and Stephen Hough.

Sahun Sam Hong (25) was the winner of the 2017 Vendome Prize at Verbier, and received second prize at the 2017 International Beethoven Competition in Vienna and was a finalist in the 2018 International German Piano Award and 2017 American Pianists Awards. On the roster of Young Steinway Artists since 2010, Sam has been featured as a guest soloist with the ORF-Vienna, Milwaukee, Indianapolis, Camerata New York and Waco Symphony Orchestras. A prolific arranger of chamber music and orchestral works, Sam’s arrangements have been performed all over the world. He organizes annual tours of these arrangements through his own agency, Subito Arts. As a chamber musician and collaborator, Sam has appeared in festivals such as Ravinia’s Steans Music Institute, Chamber Music Encounters at Lincoln Center, and the Taos School of Music. His recent collaborations include performances with Itzhak Perlman, Colin Carr, Ani Kavafian, Ida Kavafian, Daniel Phillips and Steven Tenenbom. At the age of 16, Sam graduated magna cum laude from Texas Christian University (TCU) with a Bachelor of Music degree in Piano Performance, having studied with John Owings. He is currently a student of Leon Fleisher in the Doctor of Musical Arts program at the Peabody Institute of the Johns Hopkins University.

The American Pianists Association has been supporting aspiring young artists for over 40 years and has been based in Indianapolis since 1982. It has a professional staff of seven, headed by Dr. Joel M. Harrison. The American Pianists Awards, held for both classical and jazz artists, offer significant opportunities for American pianists, ages 18-30, to advance their careers. Each winner receives a two-year fellowship, valued at over $100,000 including cash awards, fees, publicity and recording opportunities. All American Pianists Awards events are produced as public recitals and feature the finalists in a variety of settings. The organization greatly values the individual artistic sensibilities of each pianist, nurtures such individuality and does not impose any repertoire requirements during the competitions other than those necessary for the different genres. It is the intent of the American Pianists Awards to focus on artistic expression and not on competitive prowess. Further, the organization makes an effort to tailor its career assistance to suit the particular needs of the winner, offering an array of opportunities appropriate to the winner’s current career development and status. American Pianists Association strives to be the bridge between professional training and a full-fledged professional career.

For more information on the American Pianists Association visit www.americanpianists.org/.