Guest Conductor Laura Jackson, Music Director and Conductor of the Reno Philharmonic Association, will lead the ICM Orchestra in works by Coleridge Taylor and Osvaldo Golivj. The concert is free with registration. 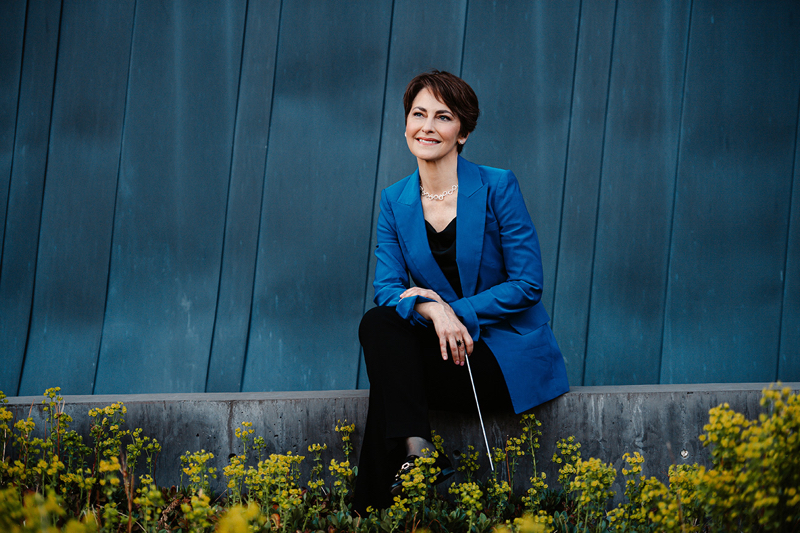 Last Round by Osvaldo Golijv

LAURA JACKSON serves as music director and conductor of Nevada’s Reno Philharmonic Orchestra. She wins praise for her passionate artistry, creative leadership, and commitment to community engagement. Laura is known nationally and internationally for both her innovative composer-in-residence projects and vibrant performances of traditional repertoire. She has cemented the Phil’s place in the hearts of northern Nevadans while also raising the institution to new musical heights and national visibility.

In addition to concerts with the Reno Phil, Ms. Jackson guest conducts nationally and internationally. She has performed with the symphonies of Alabama, Atlanta, Baltimore, Berkeley, Charlottesville, Detroit, Hartford, Hawaii, Orlando, the Philippines, Phoenix, Richmond, San Antonio, Toledo, Toronto, Windsor, and Winnipeg in addition to concerts with the Philly Pops and L’Orchestre symphonique de Bretagne in France.

Jackson recorded Michael Daugherty’s Time Cycle on Naxos with the Bournemouth Symphony in partnership with Marin Alsop, and served as the first American to guest conduct the Algerian National Orchestra in 2013.

Jackson served as the first female assistant conductor of the Atlanta Symphony Orchestra from 2004-7. Prior to her appointment in Atlanta, she studied conducting at the University of Michigan and spent summers as the Seiji Ozawa Conducting Fellow at the Boston Symphony Orchestra’s Tanglewood Music Center in 2002 and 2003. Ms. Jackson spent her early childhood in Virginia and Pennsylvania before moving at age 11 to Plattsburgh, NY, where she grew up waterskiing, swimming, and sailing on Lake Champlain. She fell in love with the violin in public school, later attending the North Carolina School for the Arts to finish high school. She pursued an undergraduate degree at Indiana University where she studied both violin and conducting before moving to Boston in 1990 to freelance as a violinist and teach at Phillips Exeter Academy in New Hampshire.